The 2015 display features the butter cow and calf standing next to life-size sculptures of Ohio State head football coach Urban Meyer and mascot Brutus Buckeye, along with larger-than-life carvings of the coveted national championship trophy and two Ohio State football helmets. The buttery Buckeye display gives fairgoers a chance to once again celebrate Ohio State’s historic win, when the team defeated the Oregon Ducks, 42-20, on Jan. 12, 2015.

Fairgoers will also have the opportunity to name this year’s butter cow and calf via Twitter by following @OHDairyFarmers and using the hashtag #ButterCowNameGame.  The person who submits the most inventive name will be awarded a Go Pro HERO LCD camera at the conclusion of the fair.

Made from 2,000 pounds of butter, donated in part by Dairy Farmers of America, the display was completed in 500 hours, which includes approximately 400 hours of sculpting inside a 46-degree cooler.

The sculptors begin by building wooden and steel frames to support the weight of the butter. From 55-pound blocks, the butter is sliced into manageable loaves and layered on the frames. After many hours of molding and smoothing the butter, each sculpture begins to take shape. Fine details are added last.

The 2015 display was crafted by a group of four Ohio-based technical sculptors including lead sculptors Paul Brooke and Alex Balz of Cincinnati, Tammy Buerk of West Chester and Erin Swearingen of Columbus. Matt Davidson, a dairy farmer from Sidney who has a degree in fine arts, assisted the team. The mural in the display features the Ohio State athletic logo with the iconic Block O and was painted by Ted Hendricks of Cincinnati.

The American Dairy Association Mideast selects an icon or theme to feature in butter that is non-political, non-controversial and reflects optimism and broad audience-appeal.  The butter display annually attracts more than 500,000 visitors at the Ohio State Fair and often gains media attention nationwide.

The butter display is in the Dairy Products Building at the Ohio Expo Center, home of the Ohio State Fair. While there, fair visitors can also learn about how Ohio’s dairy farmers care for their cows, their land and their communities. The Dairy Products Building is open daily from 9:00 a.m. to 9:00 p.m. and offers a variety of Ohio-produced dairy foods including ice cream, milkshakes, cheese sandwiches and milk. The fair will run from Wednesday, July 29 through Sunday, Aug. 9. 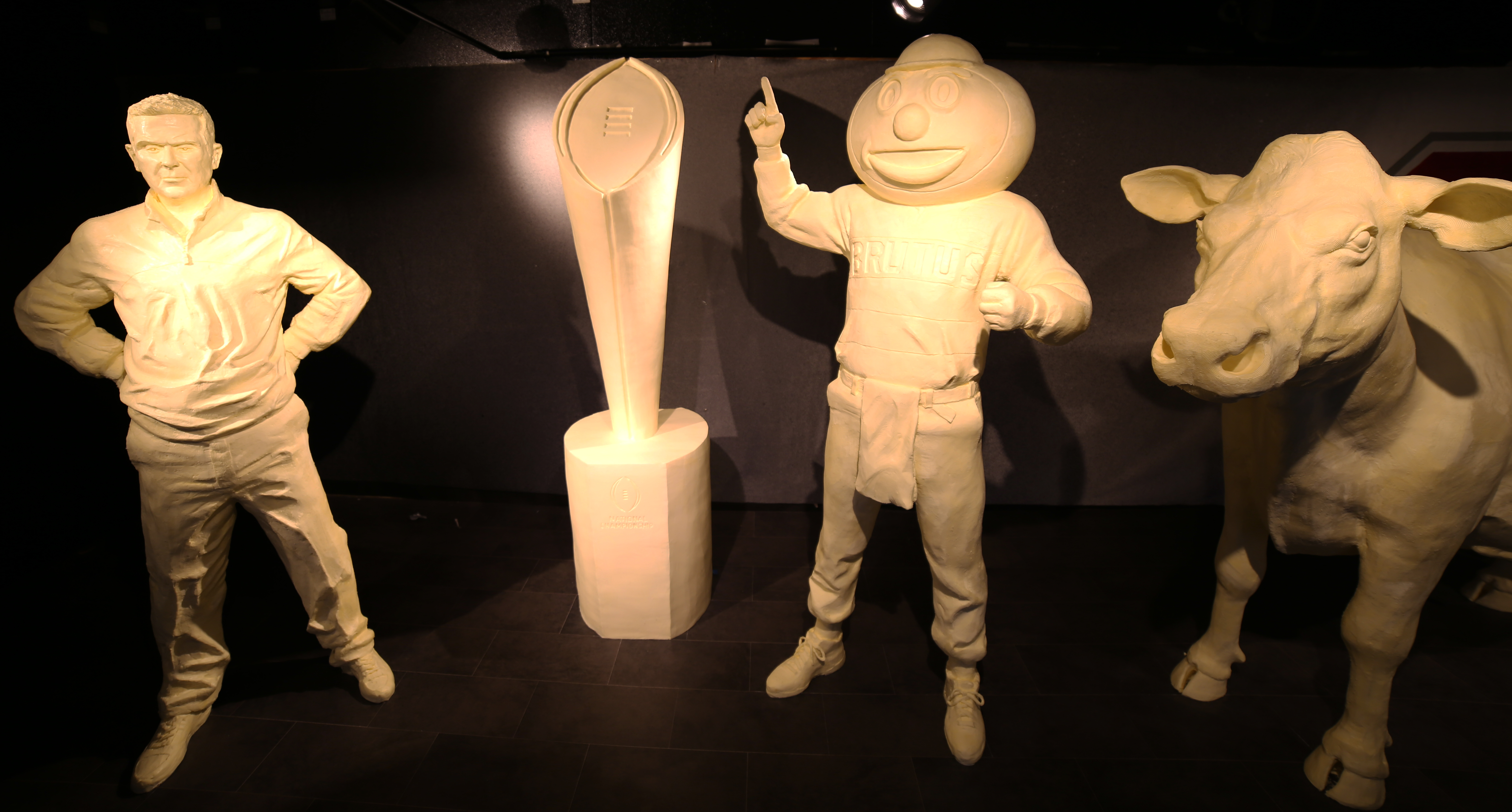 The American Dairy Association Mideast`s annual butter cow and calf sculptures share the spotlight with The Ohio State Buckeyes football team.This year`s butter sculpture at the Ohio State Fair pays tribute to the team`s 2015 victory in the first-ever College Football Playoff. Fairgoers can view the display in the Dairy Products Building from July 28 to August 9. 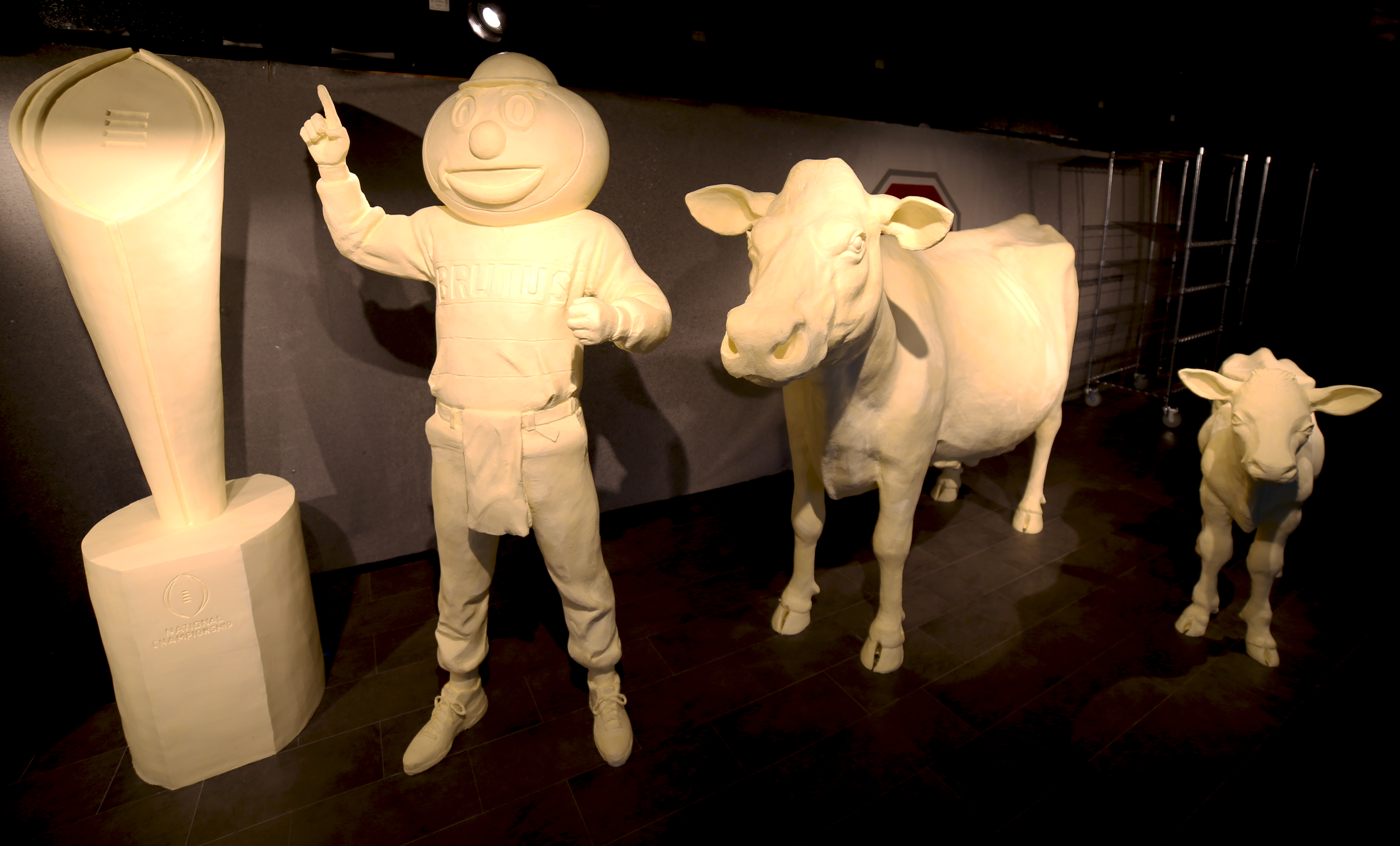 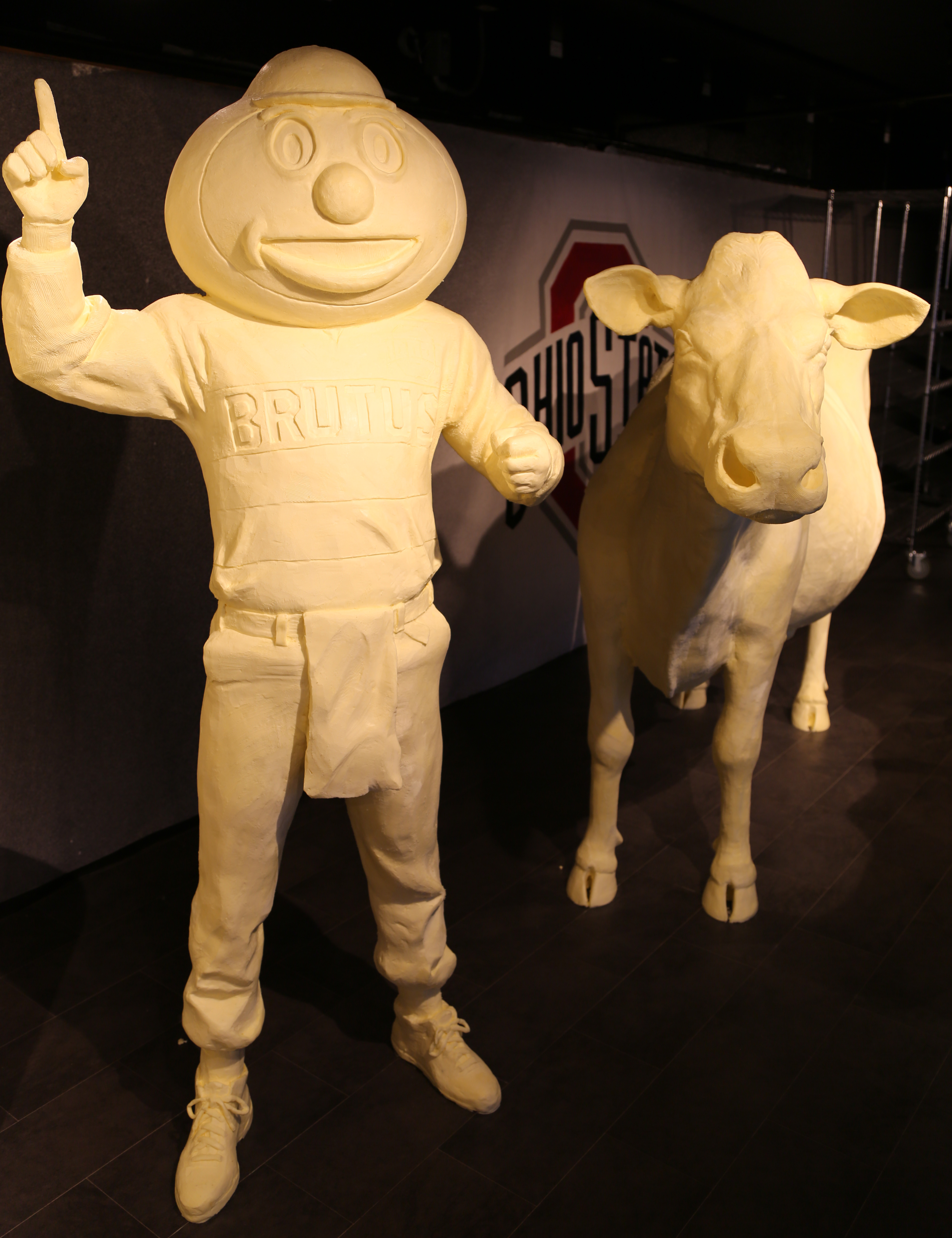 A butter Brutus Buckeye and the annual Ohio State Fair butter cow share the cooler in this year`s butter sculpture display at the Ohio State Fair. The American Dairy Association Mideast pays tribute to the College Football Playoff champions with life-sized sculptures of Brutus, the championship trophy, two Buckeye helmets and a life-size replica of Ohio State head football coach Urban Meyer. Fairgoers can view the display in the Dairy Products Building from July 29 to August 9. 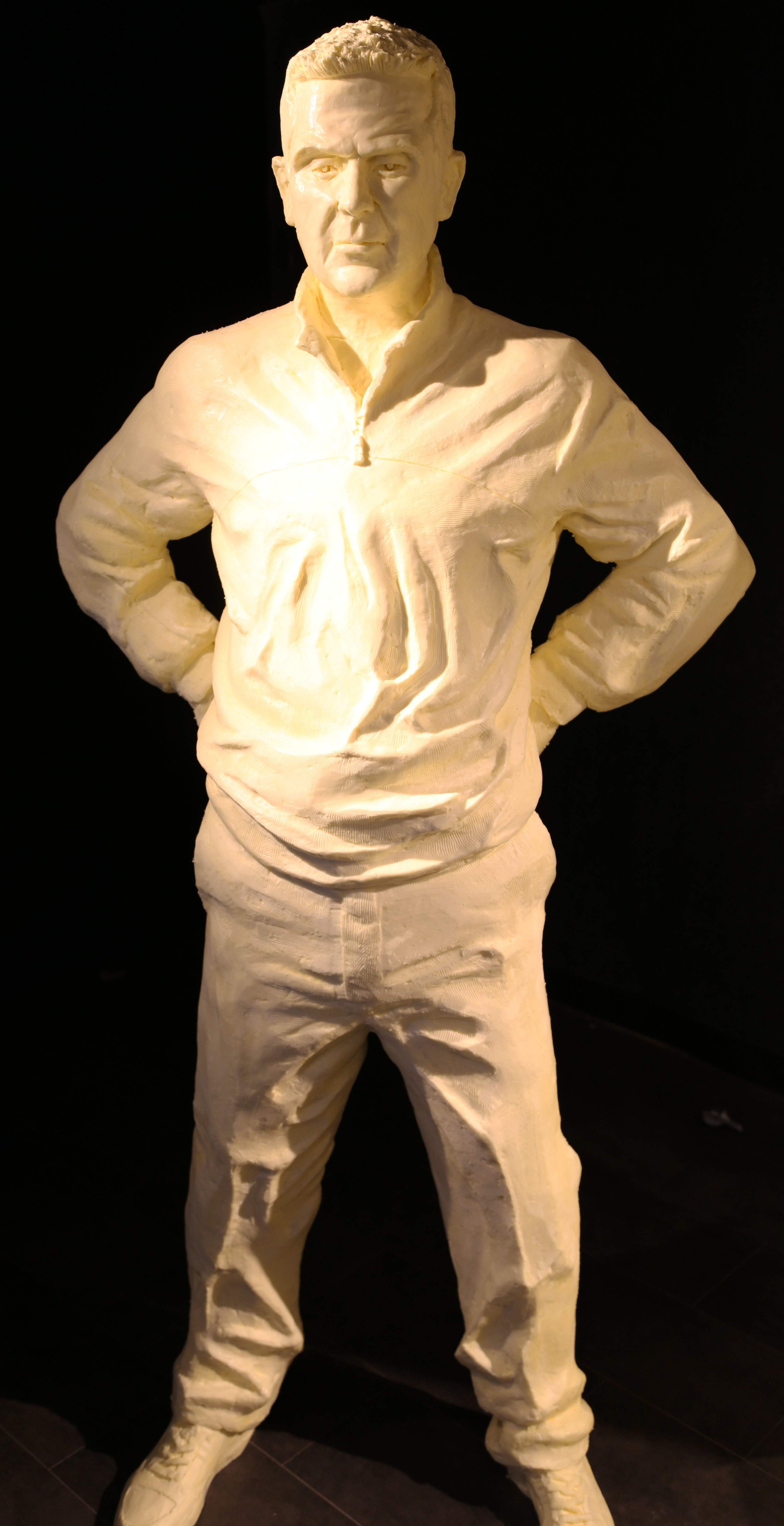 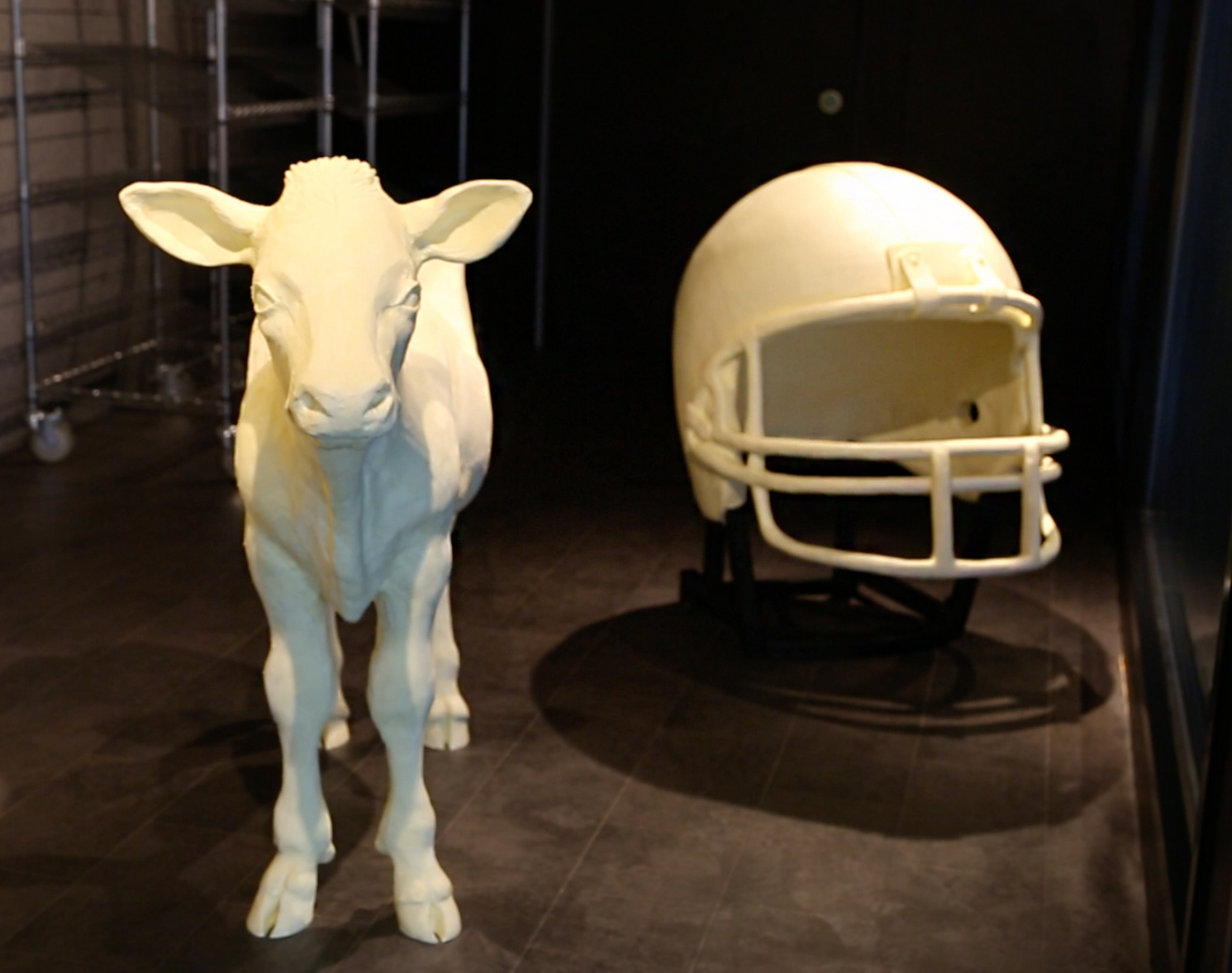 Sculptor Paul Brooke, from Cincinnati, puts the finishing touches on Ohio State mascot Brutus Buckeye, featured at the 2015 Ohio State Fair. The sculptors begin by building wooden and steel frames to support the weight of the butter. From 55-pound blocks, the butter is sliced into loaves and layered on the frames. This year`s display honors the Ohio State Buckeyes and their 2015 College Football Championship victory. Brutus joins the butter cow and calf, along with coach Urban Meyer, two Ohio State Football helmets and the national championship trophy. Fairgoers can view the American Dairy Association Mideast`s display in the Dairy Products Building from July 29-Aug. 9. 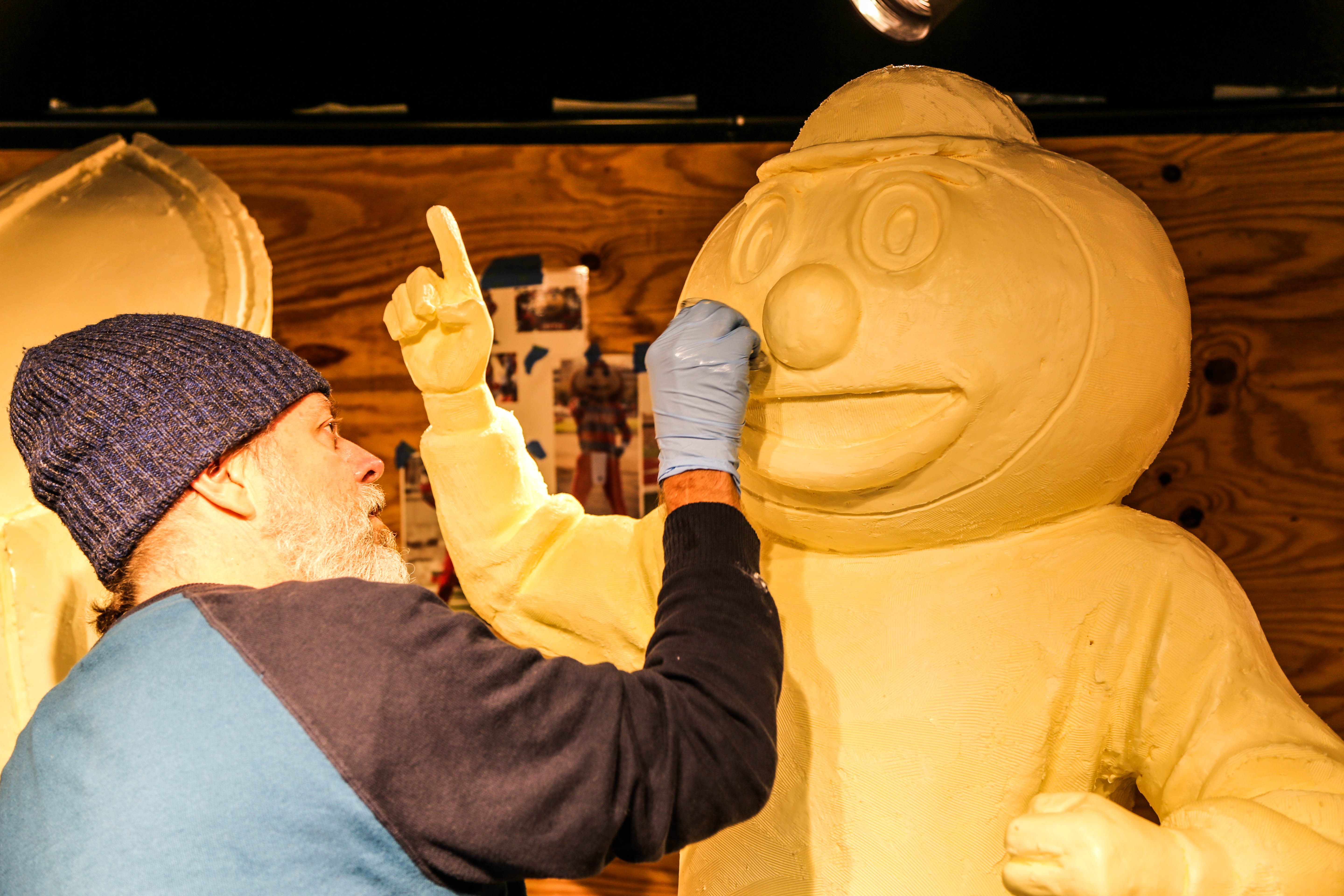 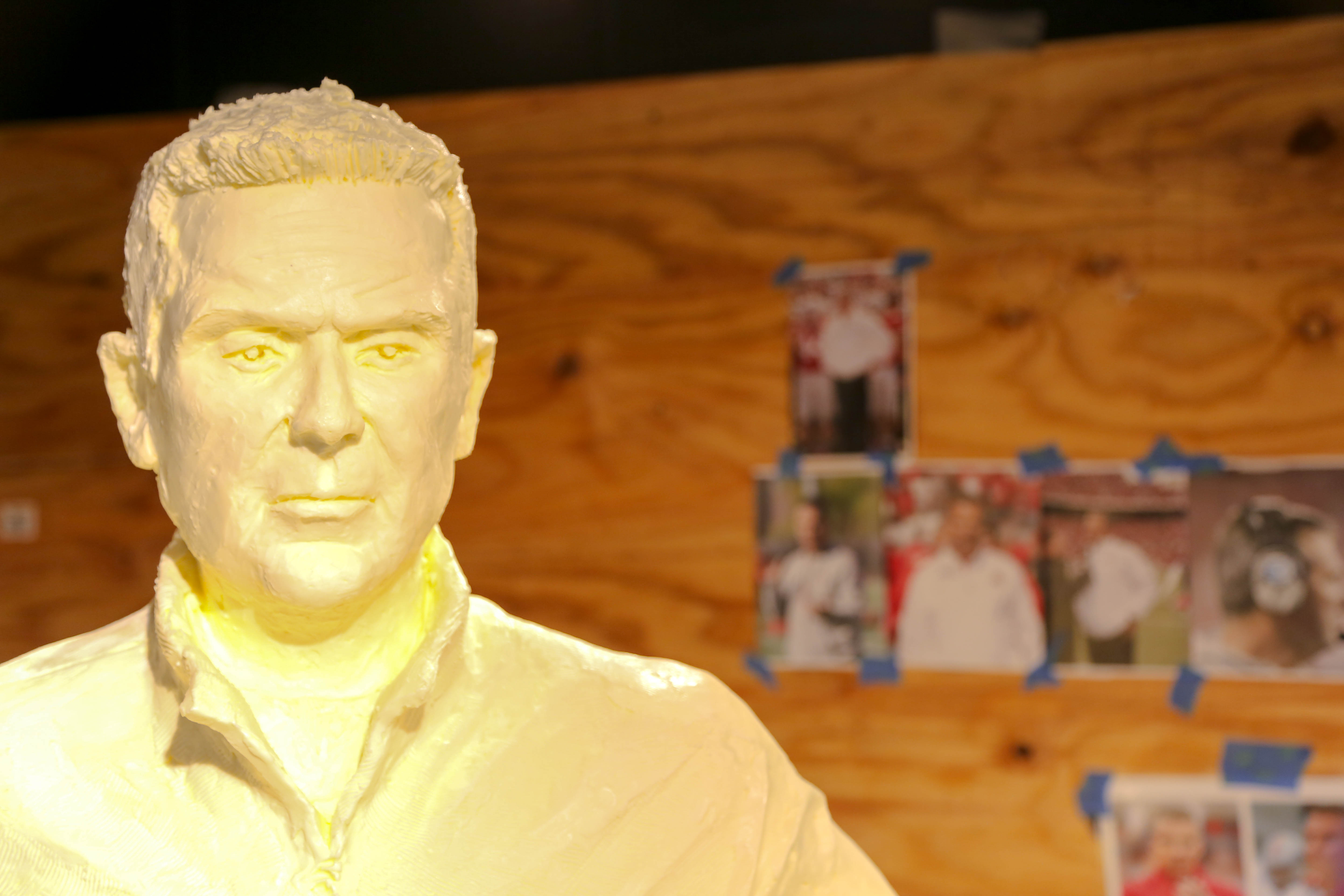 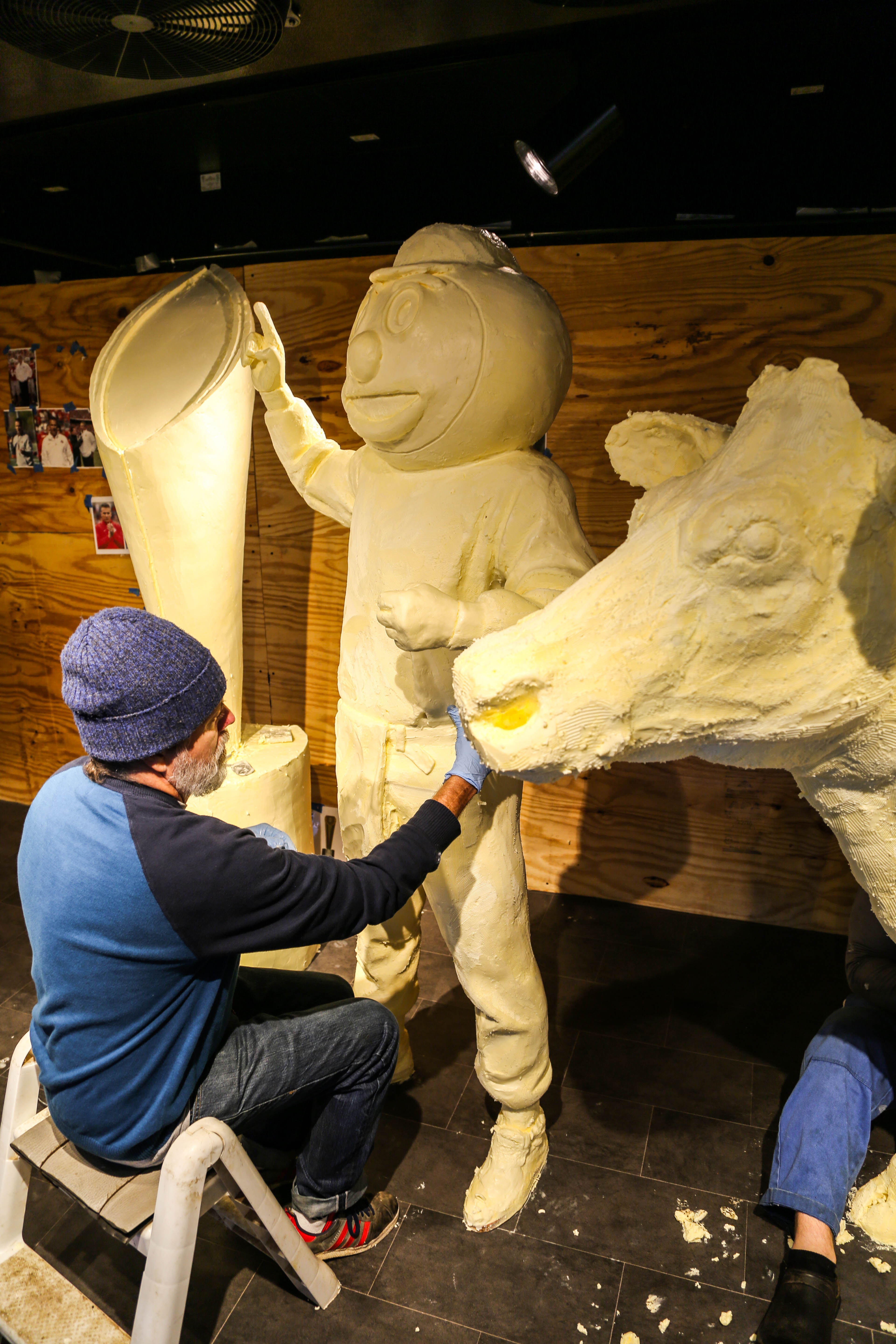 Sculptor Paul Brooke, from Cincinnati, carefully constructs the 2015 Ohio State Fair butter sculpture display. Brutus and the icons in the butter cow display case, begin as wooden and steel frames. The sculptors then slice 55-pound blocks of butter into loaves and layer them on the frames. This year`s display was made with 2,000 pounds of butter and required around 500 hours of labor. Fairgoers can view the American Dairy Association Mideast`s display from July 29-August 9. 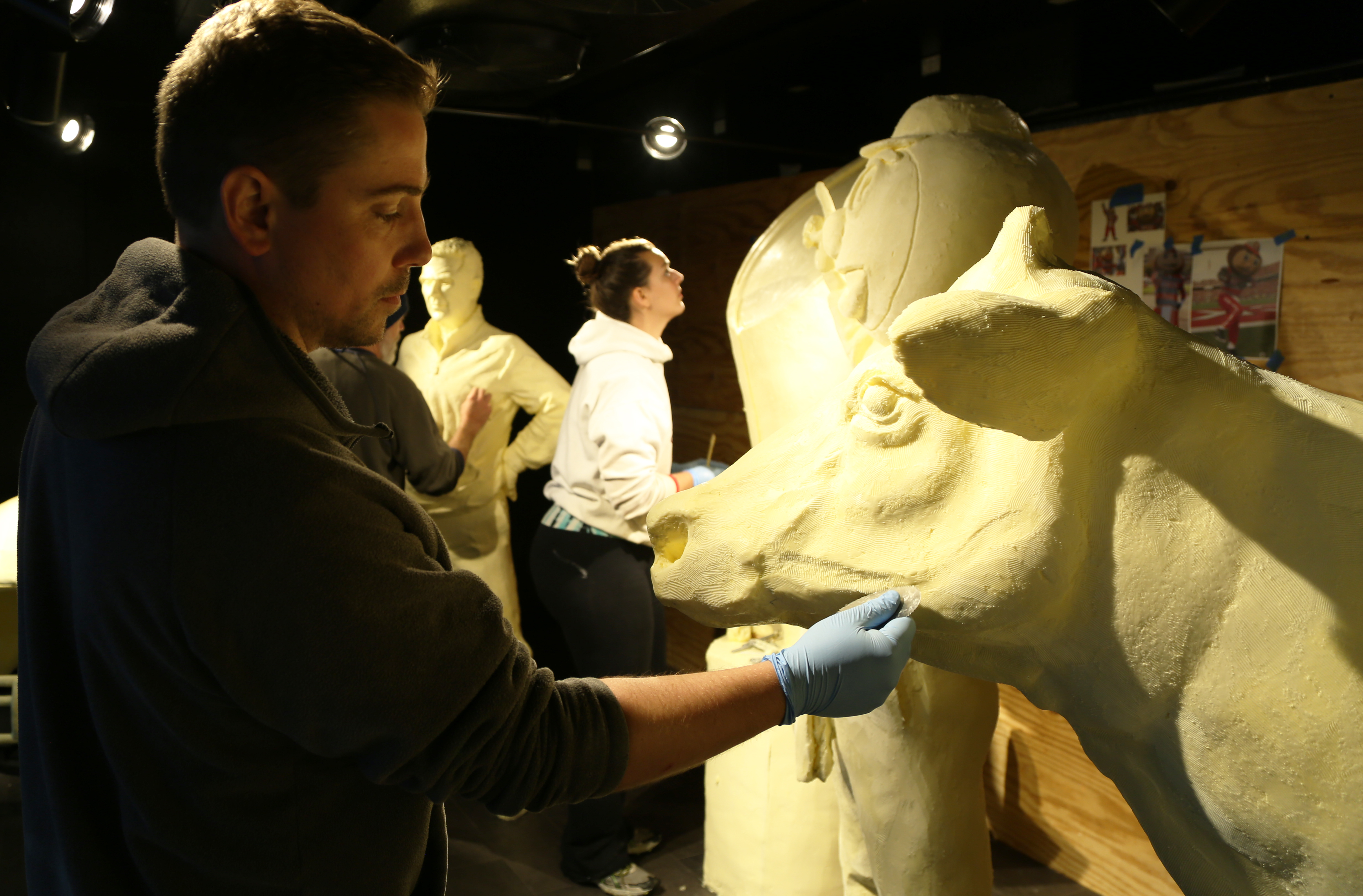